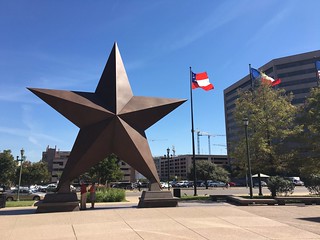 After a few months of nose-to-the-grindstone working, weÂ went to Austin, on points (thanks, Chase Sapphire!) for my post-birthday in mid-October. Neither of us had ever been to Austin, so it seemed like a good destination for a short vacation. We were there for three days, so it was a bit of whirlwind trying to cram all the sites into just a few days (and Texas, as it happens, is a really big state – getting from point A to point B can take a while). It could also be subtitled “the all things LBJ trip” because we saw the LBJ Presidential Library, then the LBJ ranch and museum out in Stonewall (about an hour outside of Austin), so I am feeling very up to speed right now on our 37th President.

This trip was my first time actually IN Texas (previous experiences were all at Dallas Forth Worth Airport, running between gates catching planes, which doesn’t count). I had heard lots of good things about it (I know a few people who after visiting, pretty much packed up their bags and moved there). We stayed downtown at the recently openedÂ JW Marriott, a very nice hotel within easy walking distance toÂ Lady Bird LakeÂ and anÂ extensive trail that runs along both sides of the river/lake (while they call it Lady Bird Lake, it’s actually a reservoir on the Colorado River). We ran along the trail almost every morning and loved it – the only downside is that Austin runners are a fit and fast and not particularly polite bunch (slower traffic had better just get the heck out of their way!). It’s a multi-use trail, so you had runners, hikers, dog walkers, strollers, bikes, kayakers (and their kayaks) all crisscrossing the trail and we were impressed at how popular and well used it was. As happens a lot, I was left saddened by the fact that in California we have very few fabulous trails or outdoor use areas as well maintained as Austin’s. It seems the more we travel, the more I see how California has lagged behind in the outdoor-friendly hiking/running trail and bike path world. And the trails/open spaces we have are often not well maintained or cared for.

We were originally going to stay at a new Kimpton in downtown Austin, the Hotel Van Zandt. but a week or two before we went, the hotel contacted us to say that their opening had been delayed. So the JW Marriott was a second choice, but it turned out to be a good one. We had a 21st floor room, which had a great view of Lady Bird Lake (and provided spectacular sunset viewing). I went to the fitness center one day, and was wowed by all of the state-of-the-art equipment. The pool was located on the 5th floor (so it had a good view as well) and was great for lap swimming (boo to tiny weirdly shaped hotel pools that you can’t swim in!), and the pool bar was a hopping place (though they closed kind of early). We missed the Kimpton’s free afternoon wine and cheese time -Â while the JW Marriott had nice eating and drinking options, none of it was anywhere close to free. Our favorite eatery near the hotel was Cru, a wine & tapas bar that we liked so much we went twice.

The LBJ Presidential Library in Austin was interesting (not nearly as interesting IMHO as the Carter Presidential Library in Atlanta, though). It’s sad how we (I) have pretty much come to associate LBJ with Vietnam, and have pretty much forgotten all of the amazing legislation that he pushed through Congress between 1964 and 1968. He retired when he left the White House and was dead at 64, so what he did accomplish becomes even more impressive when you realize that so much of it happened in a relatively compressed timeframe. The Lyndon B. Johnson National Historical Park out in Stonewall gives you a much better feel for, and perspective about LBJ the (over the top) man. Â From Air Force One Half (his private jet) and the 6300 foot runway outside the ranch house, his extensive car collection, and all those telephones (there were telephones EVERYWHERE on that ranch!) you could see how LBJ got his reputation for being larger than life.

Other highlights not related to LBJ: I finally got to see the Alamo (and like the TARDIS, it’s bigger own the inside!) and the River Walk in San Antonio. And now that I’ve been I don’t need to go again. San Antonio was basically a massive tourist trap – at least the area around the Alamo and the River Walk was. It felt like Disneyland only not as well organized. I got my first taste of Tex Mex food there, and I may get crap for this, but Tex Mex is pretty much Mexican food, folks.

Favorite museum in Austin: the Bullock Texas State History Museum where we spent a happy afternoon exploring its collections and learning a LOTÂ about Texas history.Â So all in all, two thumbs up for Austin! Wouldn’t move there any time soon, but it was a great place to visit. And a special thanks to the weather goods for the excellent sunny and mild temps we enjoyed!