I’ve been taking a bit of a break from blogging and most social media for the past several months. 2015 was a pretty rough year and 2016 didn’t exactly start off all sunshiney and great. But hey, it’s a new day – I mean, in a world where Donald Trump is the Republican nominee for president, you just KNOW the world is in a great place, right?! 🙂 So I’ll dip my toes back in the water with the story of the newest O’Shea. 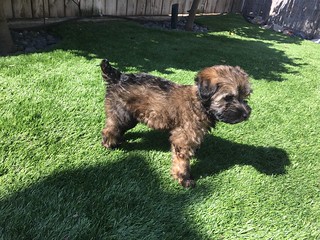 We said goodbye to Mia, our old dog, in July 2014 and we knew that we were going to need time to process her loss. We didn’t know how much and just figured we’d know when the time was right. In early February 2016, we both felt that that right time had come and we started looking for a puppy. While Mia was a wonderful dog in a thousand ways, she had one big (to me) failing: she shed like a son of a gun, 365 days out of the year. So I decided that our next dog had to be non-shedding. this led us down the “Doodle road” – poodle crossbreeds, a la Labradoodles and Goldendoodles. However, both Chuck and I agreed that Mia was the perfect size for a dog at 32-35 pounds. So adding that to the pot, I came up with a Whoodle – a Soft Coated Wheaten Terrier/Poodle mix. There are miniature and standard Whoodles (depends on whether the parent was a miniature or standard Poodle) – we decided on a female standard Whoodle, which full grown is around 35 pounds. Having made that decision, we then started the search for a puppy and found a breeder out in Adelanto, CA (way out in the high desert, northwest of Victorville). A new litter of puppies was born on February 4 and we took the leap and reserved one. In mid-February we drove out to see the puppies, and it took about 5 seconds for us to fall in love with the runt of the litter, a little girl. She was so small she fit in the palm of one hand, and rather than cry or pee, just fell asleep. The puppies were only two weeks old then, and their eyes were not completely open, they were that young. So we had a 6-week wait before we could bring her home. We spent some time coming up with a name, and finally settled on Margaret Mary – aka Maggie May. We picked her up and brought her home on April 9. 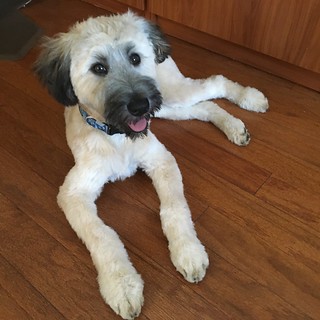 This is where I admit that I’ve never had a puppy before. I was warned that they were a lot of work. But seriously, puppies are a LOT of work! And house training! Up every two hours to take her out to potty, cleaning up little puddles of pee and stray poops all over the house. Really, there were a few times along the road in those early weeks where I deeply regretted getting a puppy (full disclosure: I was awful, moaning and bitching about how we had the dumbest, slowest-learning puppy in the world, and what had I done to deserve this? – that sort of thing). The smartest thing we did was to crate train her. She was really good about never messing in her crate, which made nighttime easier – for us, if not young Maggie.

She’s almost six months old now, house trained and semi-civilized. In keeping with her Wheaten Terrier/Poodle heritage she needs to get haircuts, and in keeping with her Wheaten Terrier heritage, when she got her first haircut, she changed color. Luckily we were prepared, as she really did change color, going from dark brown/black to a very light wheat color (with some dark parts)! She has a goofy and charming personality and the defining adjective that all who meet her use is “happy.” There isn’t a finer compliment to be paid, I’d say. Welcome to the family, Maggie May!

Gone to look for America