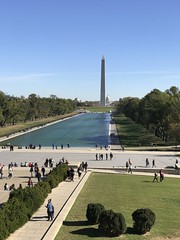 In this episode  of catching up with myself, I reflect on our recent (early Nov 2016) trip to Washington, DC. our purpose was to join the family in a tribute 5K for my brother, who lost his battle with Multiple Myeloma in late Jan. He and a bunch of friends and family had been doing this race ever since he was diagnosed. Last year he was too sick to run but cheered everybody else on. This year, my niece organized a team in my brother’s name and a bunch of us joined the team and did the walk/run on Nov 13. We decided it would be fun to go a  few days early and do some sightseeing, so we actually arrived in DC on Nov 9. Now I bet you’re thinking, “Hey! Didn’t something pretty big happen right around then?” Why yes, yes it did. We just happened to arrive in Washington, DC on the heels of the election. This added a very surreal element to the trip, for sure (and we saw several – well more than several really, an unholy number of – motorcades over the course of our 5 days there). Happily we weren’t driving – I felt sorry for the motorists. Our feet and the Metro were both working fine.

We flew into Reagan National Airport, which I will forever think of as National Airport. Hands down it is SO much more convenient than Dulles! Metro is right there, no need to rent a car, just  a few stops to Virginia or DC – you can’t beat it! We started out the day by going to a memorial that I didn’t know WAS a memorial: the Woodrow Wilson International Center for Scholars. We ended up there because we decided to get off the Metro at Federal Triangle, a stop we’ve seen a million times but always just blew past. Having recently read a biography of Wilson (and it being Nov 10), their exhibit was both timely and fascinating. After tripping onto the Wilson Center, we were hoping to go to the new National Museum of African American History and Culture and walked over to it next (on the way encountering the first of the many motorcades we saw). We encountered some women walking away from it who asked if we had tickets. When we said no, they told us were out of luck. Turns out, the museum is booked through MARCH! They did say they thought we could go on Craigslist and buy some there (wait what, buy tickets for a Smithsonian museum?!). Whether we really were going to have to wait until March or not,  it was clear it wasn’t in the cards for us to get inside on this trip, so we settled for just seeing the outside of it (it’s a really interesting looking building). 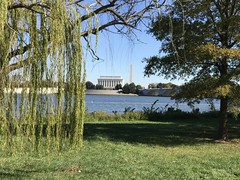 Plan A being effectively thwarted, we resorted to an improvised Plan B which was based on the fact that it was an absolutely beautiful day for walking with clear skies and cool temps. So we decided to walk along the Potomac River Trail and see what there was to see. We started by stopping at the Lincoln Memorial for an inspiring visit (it’s just good for the soul to read the Gettysburg Address and Lincoln’s second inaugural address from time to time). We were going to go up the Washington Monument but it’s closed for repairs until Spring 2019. Ah well. We ended up walking all the way to Georgetown, along the way stopping to see Theodore Roosevelt Island, Rock Creek Park (well, part of it, anyway), along the way learning that Rock Creek Cemetery and the Adams Memorial are not, in fact, located in Rock Creek Park. Once in Georgetown we walked along the old C&O canal locks in Georgetown, enjoyed a yummy late lunch and generally had a great day before making our way back to Crystal City, where we were staying (hotel rates in DC being what they are, Crystal City is a great deal and just quick subway ride away from downtown).

Our second day in DC was Veterans Day, so we decided to start at Arlington Cemetery. Arlington was quite a happening place on Veterans Day. The oldest survivor of Pearl Harbor was there (104 years old!), telling stories and posing for photos and President  Obama was at the Tomb of the Unknown Soldier, so security was pretty tight. We watched the 21-gun salute (with howitzers!) and then walked over to JFK’s burial site and eventually meandered our way over to the Iwo Jima monument, that I had never seen before. Chuck was enjoying reminiscing about the Marine Corps Marathon route, which we ended up following a part of). Between our first two days, we walked over 25 miles!

We met up with my sister and brother-in-law on Saturday and they had a car so our on-foot tour of DC ended. Having a car menat we could venture further afield and we went some to some new places: President Lincoln’s cottage, which is located on the grounds of the Armed Forces Retirement Home in northwest Washington. In Lincoln’s day he could ride his horse straight there from the White House. It’s a more circuitous route now but well worth the trip. Then we drove out to Hillwood Estate, Marjorie Merriweather Posts’s little getaway (!) in Washington.

Sunday was the 5K, which turned out to be a pretty easy walk around National Harbor (another place I’d never been!). It was great to see the family, and a wonderful way to remember my brother. We wrapped the day up seeing the sites of National Harbor, including taking a ride on the Capital Wheel.

All in all, it was a fun, action-packed few days. It never ceases to amaze me that no matter how many times I visit, there are always new places to go and new things to see in Washington. Photos here.

Greetings from the wrong side of the Cascadia Subduction Zone!