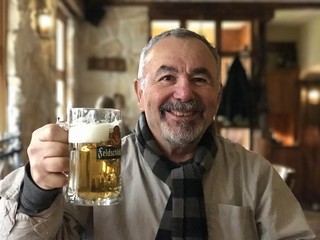 A certain someone turned 70 on March 8. That seemed like a pretty big deal, so to celebrate we took a trip to France and Germany, mostly seeing things we’d never seen before. We started the trip in Paris. Well, the adventure really started on the flight from LAX to Paris. We flew Air France and at the check-in counter had a chance to upgrade to business class for not TOO much money ($300/seat). We decided to splurge and took the seats. Our original seats were premium economy and we knew those were pretty nice. Business class was nicer, and we got glasses of champagne to start off the flight, our meals were served on real plates with real silverware and the screen on the seat backs were bigger. But the advertised fully reclinable seats were not all that comfortable (as usually, I didn’t sleep at all) and dollar for dollar we decided that in the future we’ll stick with premium economy (which is definitely worth the extra $$, IMHO) and save some dough. 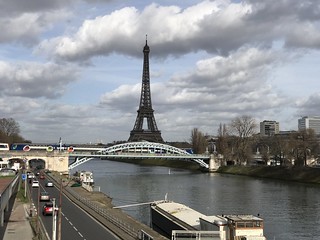 In Paris we stayed with our friend Meagan, who works for the New York Times and lives in an apartment in the 16th arrondissement (not too far from the Eiffel Tower). It was great to catch up with her, and to have a few days to enjoy Paris in the winter. It was on the cold side with some rain, but it really only made the city seem even lovelier (fewer tourists!). We treated ourselves to lunch at the Jules Verne restaurant at the Eiffel Tower (and I, for the first time ever, actually got to go up the Eiffel Tower!). The view from the restaurant was fabulous, the food was delicious (five courses which included pigeon!), and the champagne and wine wonderful. All in all, it was a once in a lifetime dining experience. The next day of our two days in Paris we kicked off the sightseeing with a visit to the Catacombs of Paris. What an amazing place! It was creepy, interesting, sad, and beautiful. We were down there walking through the site for probably two hoursÂ and came away feeling our mortality. We also hit the Musee d’Orsay – for me, it was the first time. Every other time I’ve been in Paris time or circumstances always got in the way. What a beautiful building – and of course, the art collection is nothing to sneeze at either! 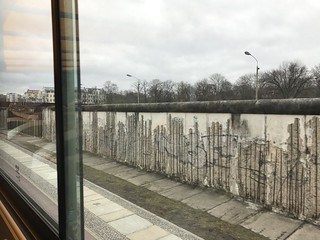 We took the train to Berlin (using our handy dandy Eurail passes) which took the better part of a day. The countryside was beautiful, the train had wifi and they fed us, so the day passed painlessly. We arrived in Berlin in the late afternoon and were able to pretty easily navigate the Strassenbahn from the train station to our hotel which was located about a block away from Checkpoint Charlie. The Mercure Hotel & Residenz Berlin Checkpoint Charlie was really nice, part of the Accor chain. We could walk to lots of tourist sites from there and there was a nice restaurant and bar on site. They also had good (free) wifi, a fitness center and a spa! We quickly realized that Berlin is a huge city and we would only be able to scratch the surface in two days. We invested in tickets for a hop-on, hop-off tour bus that made seeing the city at least semi-doable. The tour bus helped us do a circle of both West and East Berlin and the most amazing thing to me was that you really can’t tell the difference between the two anymore. The remnants of the Berlin Wall and the memorials are the biggest indicator of the past division. I first came to Germany in 1981, so it was pretty mind-blowing to see how much things changed in 36 years. SeeingÂ the Brandenburg Gate, walking around the Tiergarten, enjoying the sights and sounds of a big, bustling city – a lot has changed in the course of my lifetime!

From Berlin we took the trainÂ to Dresden (Chuck’s choice). I didn’t know much more about Dresden than what I had read in Slaughterhouse Five, so was not expecting it to be so charming and, well, historic. They have rebuilt Dresden as the beautiful old city it was before 1945. You can still see the scars from WWII Â – the Dresdeners have intentionally preserved them.Â The buildings are an interesting mix of battle-scarred old stone and new. Walking around Dresden at night is magical, as the buildings in the Altstadt are lit up and cast shadows over the cobblestone streets. We rode the funicular railway (Stanseilbahn) for a great view of the city and ate pretzels and drank beer and generally had a grand time. We stayed at the Gewandhaus hotel, which was located on the Ringstrasse, about 15 minutes from the train station and an easy walk toÂ the Altstadt and across the street from a tram stop. This was a really nice place, with a lovely, helpful staff and rooms that seemed pretty much 5-star to us. We celebrated Chuck’s birthday with a nice dinner at the Altmarkt Keller, aÂ real deal German restaurant, enjoying yummy sausages and wienerschnitzel.

The adventure continues in part 2, where we run out of time and change our travel plans. Lots o’ pics here.

So long and thanks for all the fish!