At the end of part one, I mentioned that we had to change our plans. We basically ran out of time – in our planning we had underestimated the time it was going to take to get from Point A to Point B, C, etc. Originally we had hoped to see Switzerland and Austria and realized that was overly ambitious for a two week trip that was going to include a start in Paris and a tour of Germany. So we scaled back and decided to try and include Prague. By the time we reached Dresden we knew that Prague was out of the question if we wanted to travel the Romantic Road and still make it back to Paris in time for our flight home. We were sad, but that just meant we were going to have to come back and see Switzerland, Austria and the Czech Republic another time.

So we took the train from Dresden to Munich where we rented a car at the Munich train station. Our plan was to drive from Munich to Frankfurt along the Romantic Road. Our first stop was a sobering visit to Dachau. I was there in 1981 so knew what to expect. Chuck, even with my warnings, was pretty overwhelmed by the horror of what happened there. It’s changed some since I was there – it has more of a museum feel now, and there’s a memorial. It’s still massively depressing and just like in 1981 it was a cold, rainy day. I’m beginning to think the sun never shines there. Several school groups were there, and I hope they came away with the same feeling we had, that this was a horror that should never be forgotten and certainly never repeated.

We spent the night in Dachau, and maybe it was just where our heads were at, but it was the least enjoyable night of our trip. We just really never quite felt a good vibe there. The hotel we stayed at was quite nice – don’t get me wrong – and everybody we encountered was pleasant. It just felt good to leave the next morning. 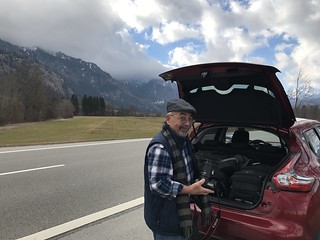 The best part of the trip officially began for Chuck because he got to drive on the autobahn. The saddest part was that we rented a Nissan Juke, not a vehicle known for its amazing top speeds and excellent acceleration. He still managed to get it up to speeds in excess of 120mph, and we were being regularly passed. I can see why German cars are more utilitarian than American cars. At those speeds you don’t have time to drink coffee or eat snacks!

We zipped off to our next stop, the charming village of Schwangau where we spent the night and visiting Hohenschwangau and Neuschwanstein. Schwangau is at the very beginning (or very end, depending on the direction you go) of the Romantic Road, which starts in Fussen and ends in Wurzburg. we stayed at the Hotel Mueller, a lovely hotel that was right in the center of the village and in easy walking distance of everything. We had a beautiful view of the Alps from our room and the restaurant had views of Neuschwanstein. 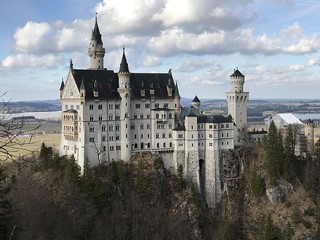 Schwangau is crazy during the day, with bus loads of tourists coming and going – but come 4 or 5pm all the tourists head to the big city and we had the village to ourselves. We could have easily stayed longer, but the Romantic Road (and our looming return to Paris) called. We toured Hohenschwangau Castle first – a good thing because while it’s charming, Neuschwanstein pretty much spoils you forever when it comes to spectacular castles. We did the guided tour then walked over to the Marienbrucke for the “money shot” of the castle. I was last there over 30 years ago. It was fun seeing it again and to see that King Ludwig II of Bavaria is no longer being referred to as “Mad Ludwig.” These days he’s viewed more as misunderstood – a young man not well equipped for the job that was thrust on him. Now he’s the “Fairy Tale King” – a fellow who preferred a life lived in his imagination to the real world. 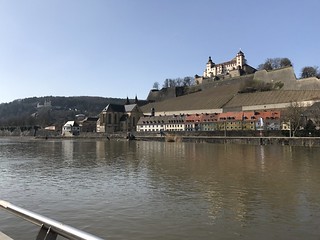 We spent the next day driving up the Romantic Road. part of the time we meandered along the blue highways, but to say that was the slow route is a big understatement. Plus Chuck was champing at the bit to get back on the autobahn. We stopped at Landsberg and Rothenburg ob der Tauber, ending the day at Wurzburg, the end of the Romantic Road. We stayed just outside the old town in a ver nice, modern place, the Novotel Wurzburg. We were pretty pooped when we got there, and since we didn’t SEE the old town from the hotel we were worried that we were far away from it. The next morning we realized our error – we were literally just a few blocks from the Residence (an old palace) and a good healthy walk to the Marienberg Fortress. There are locks on the Main River there and we got to watch a shop travel up the lock – which turned out to be a lot more interesting than I expected! Wurzburg, like Dresden, was firebombed and almost completely destroyed at the end of World War II and like Dresden has been lovingly restored.

We left Wurzburg in the afternoon and drove to the Frankfurt Hauptbahnhof to return the rental car and spent our last night in Germany at the Hotel Concorde, a nice place that was just a few blocks from the train station ( we wanted to be close to the station since we had an early train to Paris the next morning).Â We spent the evening walking across the Main River and having dinner at a very German restaurant called the Apfelwein WagnerÂ where they server a regional specialty, apple wine. I was expecting something along the lines of cider, but it’s not at all like that. Well, maybe flat sparkling cider. They say it’s an acquired taste but it grew on me. I mean, I wouldn’t buy a flagon to go (which the restaurant was selling), but it wasn’t that bad! We both had sausages and sauerkraut (delicious!) and got a kick out of all the people coming and goingÂ and the amazing restaurant staff that kept the crowds moving in and out.

The next morning we took the train back to Paris and spent the night in RoissyÂ where several years ago we spent a wonderful week trapped by an Icelandic volcano. We walked around the town, remembering all of our old haunts and enjoyed a bottle of wine, a baguette, some salami and chess – our ritual during that week when we wondered how long we’d have to wait to get home. This trip the answerÂ was easy – we took the shuttle to the airport in the morning and were back in LA 12 hours later.Â This was the first trip where both Chuck and I felt like we could have stayed longer – a lot longer, to spend more time in some of the amazing cities and to just see more – Switzerland, Austria, the Czech Republic. I can’t waitÂ for our next trip!

Starting to plan for a very big trip!

Our trip to England, in which we encounter sheep, castles, assorted other historical sites, and a volcano