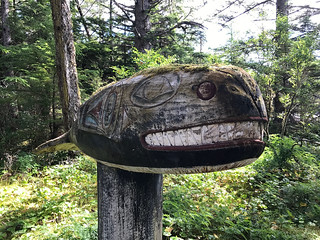 Days 3-5, Where We Encounter a Lot of Totem Poles, Glaciers, a Squirrel, Sea Lions, and the Tails of Some Whales: On Day 3 we visited Kasaan in the morning and met the Haida (a corporation, not a reservation – they made a fortune in 1971 with the passage of the Alaska Native Claims Settlement Act). We toured a longhouse and walked along a lovely trail through a temperate rainforest and saw several totem poles and a carving shed where a canoe was under construction. Our guide, Fred, had a hypnotic voice and a drum that he beat with some irregularity (supposedly to keep bears away) that made you basically ready to follow him anywhere. In the afternoon we headed to Thorne Bay which once upon a time was a floating logging camp. Some of the homes are still floating; others have been brought ashore on skids ready, I guess, to someday float again. We got a tour of the local oceanfront and saw the local library, a bustling community hub that currently resides in a single wide trailer. They are fundraising for a new library and have a way to go – $1.4 million, bless their ambitious souls. We pushed them along by $20. In the evening a few of us hiked to a great overlook – the trail wasn’t that long but there were some single track bits that were a bit sketchy so we all felt like we had accomplished something when we got back to the boat. We celebrated our survival with a beverage from the bar.

We spent Day 4 in Wrangell, visiting a Petroglyph Park at the beach then some of us climbed Mt. Dewey, a lovely little hill that provided a nice view of the town of Wrangell and the harbor. In the afternoon, I went to the local museum, walked around the town and went to an Internet cafe to catch up on things. Chuck decided to go the Rainbow Falls outside of town and caused a mini crisis on the boat since this wasn’t a planned activity. At first he was going to ride one of the bikes on the boat (there are two) but they had no helmets and this was deemed a safety issue. At this point, the captain entered the picture and borrowed an SUV from a toru group in town (there are several companies that run bear watching/bear killing and fishing trips out of Wrangell) and drove Chuck to the trailhead then came back an hour or so later and gave him a ride back. Oh, and before they sent him out on the trail, they armed him with a can of bear spray. He had a fun hike but felt a bit like the kid who ran away from home but only made it to the end of the block.  Rebellions on board, as it turns out, are quickly and effectively nipped in the bud.

Day 5 was our first glacier day. We spent the day traveling down Tracy Arm to see the South Sawyer and Sawyer Glaciers. Chuck rented a telephoto lens for the trip and that paid off this day as he took some absolutely spectacular shots of the South Sawyer Glacier calving. I thought the day would drag a bit since we spent the whole of it on board but hustling around the boat trying to find the best location to view the glaciers provided a fair amount of activity. The weather is finally changing and the weird heat wave has ended and temps are back to the more normal 60’s with overcast skies and some rain. We also saw humpback whales, sea lions, harbor seals, some Forest Service kayakers who were out counting seals and some crazy ass people who were apparently flown in and are hiking and camping on the glacier. At least that was the story I gleaned.

Next up: Juneau! Pics here.

End of the journey