15 years ago Chuck and I were planning a really neat flying trip up the Hudson River Valley with my sister and brother-in-law (who is a small plane pilot). We actually had started the journey when I came down with a nasty sinus infection that grounded me in Maryland (we were starting there to visit family). To say I was disappointed is an understatement – in fact, it spurred me to go see an ENT and find out what was causing my semi-constant sinus issues. Lo and behold, I had various things happening in my nose which were all correctible with surgery. Fast forward all these years later and I have had, I think, one sinus infection since the surgery (before surgery I was averaging about six per YEAR). Anyway, that’s not what this post is about. It is about the do-over trip where we finally did make it up the Hudson River Valley. Unfortunately not by small plane but by car. My brother-in-law belongs to a flying club and the plane he uses for these multi-passenger trips was getting an overhaul that took longer than expected. 🙁 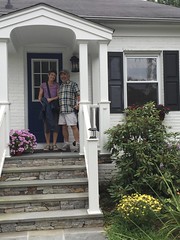 We drove from Pittsburgh (their home base) to the bed & breakfast my sister found online (she is skilled in sniffing out great hidden gems). It was a long day of driving but it paid off – the b&B was fabulous and sat right on the banks of the Hudson River in Highland Falls, NY. Overlook on Hudson sits on what was the J.P. Morgan estate 9the other claim to fame of the place is that Billy Joel wrote New York State of Mind there and you are welcome for the earworm I just gave you). The river views from the patio were absolutely stunning, the rooms were cozy and the innkeepers (the Donnery family) couldn’t have been more gracious. If you plan on visiting West Point as we did, its location couldn’t be more convenient – it’s almost literally next door.

After a wonderful breakfast the next morning we headed out for our first adventure: the old Rhinebeck Aerodrome, an airfield that has a bunch of vintage planes, all of which still fly. They out on a hugely entertaining daily show that involves lots of the planes and a kinda cheesy but lots of fun storyline involving (among other characters) Trudy Truelove, Sir Percy and the Black Baron. The show lasted a few hours after which we explored their museum of old planes and Louise & Tony took a biplane ride. The only thing to mar the day was the weather – it was REALLY hot and humid. But if you have a kid (or you are a kid at heart) this place is a must see in the area. It’s just flat out fun. When we got back to the b&b we all jumped into the very nice pool they have in the backyard and cooled off while enjoying a fabulous view of the Hudson River. Ahhhhhh! We spent a day touring West Point (hint: it’s HUGE!). We took the tour that included the cemetery (well worth the extra time) and spent most of the day exploring the campus (okay, and the gift shop). We had a late lunch at the Thayer Hotel which sits just inside West Point and has (wait for it, because this will be a recurring theme) wonderful views of the Hudson River.

Over the next few days we did still more more exploring. We visited Hyde Park and toured Springwood (Franklin Roosevelt’s house) and Valkill (Eleanor Roosevelt’s house). They are both lovely. ER’s house is more intimate and feels like a real home, whereas Springwood is more of a show home. You can see why ER was happy to get away. We spent a few nights at my sister’s friend Gail’s lovely home in Staatsburg near Rhinebeck. We attended a performance of Much Ado About Nothing at the Hudson River Shakespeare Festival on the grounds of the Boscobel House & Gardens. The performance was held in a big tent (I’m not doing it justice to call it that) that seats 540 people (see? really big tent). They set it in 1950’s America and really played up the #metoo elements. it worked surprisingly well and was still funny. the biggest compliment I can give it is that Chuck stayed awake for the while thing. 🙂 We also visited the campus of Bard College and were blown away at how peaceful and lovely it was. The sunken garden and the (wait for it!) views of the Hudson River were amazing. 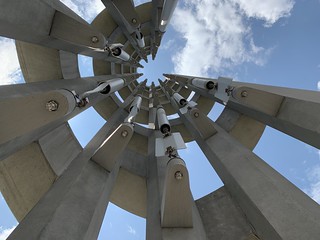 On the way back to my sister’s we stopped to see the Flight 93 memorial. We had visited the temporary memorial several years ago and had found it to be one of the most heartbreakingly sincere places either of us had ever visited. This new, permanent memorial is larger and tells the story very dramatically – and while it lacks a little of the unique sincerity of the temporary memorial, bear witness and stands as a testament to the courage of a small group of people who gave up their lives to stop a much greater tragedy. While it’s not on the way to much of anywhere, it is well worth a visit. It’s still a work in progress with some elements not yet finished so I hope we come back in a few more years to see it completed.

Pics of the trip are here.

Gone to look for America