To celebrate Chuck’s retirement (well, mostly retirement, he will still be doing some consulting, at least for a while), Chuck and Maggie and I decided to take a celebratory road trip. While we have thought about buying an RV we have yet to make a decision on size, type, age (used or new) or even whether renting them occasionally might make more sense. So for this trip we are driving and doing a combo of camping and moteling. We had a deadline – we had to be in Chicago by July 3, to meet Chuck’s sisters and celebrate the July 4 holiday with them in Chicago. And because my eyes are always bigger than my stomach, I thought it would be great to go by way of the Grand Tetons and Yellowstone, then “swing” by Little Big Horn and then head to Chicago. In 9 days. Geography is not my strong point.

We left LA and headed to Mesquite, NV for the first night, not a super long distance but it takes longer than it should because LA traffic goes on for what seems like forever (past San Bernardino). Having Maggie with us, we have been trying to find dog parks as we go so she gets some play time in and isn’t just stuck in the car all day. Mesquite had a really nice one, with a big grassy space and room to run. She made a few friends and had a good time after which we hit the road for Brigham City, UT. We camped there in a KOA campground which we agreed was at best a “C” grade – pretty run down with facilities that closed even earlier than posted but we survived. We gained more tent expertise and Maggie made friends with a little dog named Andy and Andy’s parents invited us to see their big RV trailer. It was quite grand with a step-up bedroom and (I think) three slide-outs that made it seem huge. There was even a peninsula in the kitchen! Our tent seemed a tad minimalistic when we went to bed. In reading about Brigham City, one of the highlights is that it is quite close to Promontory Point and the Golden Spike National Historic Site. We swung by on our way out of town and bagged our first National Park site of the trip (Chuck has a lifetime senior National Park pass which is really worth its weight in gold). It was cool to see Promontory Point and walk the old rail line paths as we were huge fans of “Hell on Wheels,” the TV show about the building of the Transcontinental Railroad. We bought the first sticker for our Yakima roof box there. And Maggie saw her first (baby) rattlesnake. She took it better than me (I jumped a foot in surprise).

From Brigham City we headed north to Jackson Hole, WY and dropped Maggie off at a boarding place called Dog Jax (and if you ever need to board your pet in Jackson Hole, I can’t recommend these folks highly enough – they are super nice and the facility is great and reasonably priced and they are careful about finding a dog’s proper play group (Maggie hung with the puppies and small dogs). Yellowstone (really, all National Parks, Monuments and Historic Sites) have pretty strict rules about pets – they have to stay in designated areas (mostly just around the larger facilities, campgrounds and parking lots) which really restricts where you can go and what you can see. We stayed over at the 49er Inn & Suites for our first and last night in the Yellowstone/Grand Tetons area – another great place that was dog friendly, had a phenomenal breakfast and didn’t break the bank (Jackson Hole can be pretty expensive).

We left Jackson Hole and headed up to Yellowstone by way of the Grand Tetons. Passing through the Grand Tetons, traffic slowed to a stop as we all watched a bear come out of a wooded area. It stood up in the middle of a pasture and looked back from where it had come out and two cubs came tumbling after it – a mama bear and her cubs! The three of them then began meandering across the field as we all snapped pics. A ranger kept telling people to stay out of the field and give the bears space – but she didn’t count on mama bear, who turned and started heading for the road and all of us. When she was maybe 50 yards away, the ranger started yelling at us all to get in our cars and pretty much as she said that the bear went from ambling to trotting right for us! It was by far the closest I’ve ever been to a bear. 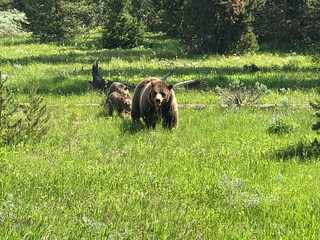 We spent the night at the Bridge Bay Campground in Yellowstone, nicely located super close to Yellowstone Lake. Bridge Bay campground’s claim to fame was that it had flush toilets (versus vault toilets) and facilities to clean dishes (no showers). We made the reservations the night before – while Yellowstone is very busy in the summer, people make reservations so far in advance there are often cancelations so your odds of finding last minute campsites (especially tents and/or no hookups) is pretty good. The weather turned cold and wet on us so it was pretty miserable setting up the tent in the rain. The good news is that we set a personal record for fastest setup (all it takes is a little motivation) so that was good. The whole bear thing kind of freaked me out (okay, totally freaked me out – I was sure that we were going to be eaten by bears while campng after reading all the warnings and the long list of things you shouldn’t have in your tent (food, lotions, anything that ever had food or lotion in or on it, basically, you know, anything). And all of the stores sold bear spray, so all in all, I don’t think it was totally crazy to think we could be eaten by bears in our sleep. Chuck pointed out that this very rarely happens – to which I responded rarely does NOT mean never! Happily we were not eaten and all was well other that the fact that our three season sleeping bags were not up to the low 40’s upper 30’s temps of the night. The tent held up well against the wet, so that was good. We stuck with freeze dried food so we’d generate fewer dishes and really, what self-respecting bear would want freeze dried food when there were so many tasty humans around? Yellowstone is huge (duh!) and on our limited schedule we only had time to drive the Lower Loop but did manage to see the Grand Canyon of Yellowstone, Old Faithful and a whole bunch of geysers, in one of which we heard that last year some guy decided to hot tub in one and dissolved. Death basically is all around you at Yellowstone, it seems. We escaped unscathed albeit a bit cold and damp swearing, to paraphrase Scarlett O’Hara, to never set a tent up in the rain again.

We headed back to Jackson Hole for the night and picked up Maggie (who had a fabulous time at Dog Jax) and headed off toward Chicago. This is where we realized that there wasn’t enough time for Little Bighorn which as it happens is in the Middle of Nowhere, Montana. It would have added a day the trip and two long, long days of driving to get to Chicago by July 3 at noon (our deadline to get Maggie checked into her pet resort). So we opted out of Little Big Horn but did get to see Devil’s Tower which was pretty amazing! From there we drove to Casper, Wyoming for a night (a lovely town where I would spend more time if I could), stopped at a fabulous BBQ place along the road where we sat and watched amazing clouds move across the very big sky (the sky really does seem bigger in Wyoming and Montana) and then on to Rapid City, South Dakota for the night and found it to be a charming, hip city with a great dog park and excellent restaurants (we went to dog-friendly Murphy’s Pub & Grill which had a lovely patio and many dogs and their people). We stayed at a Country Inn & Suites by Carlson (part of the Radisson chain – new to me but if you are traveling with a dog, I highly recommend them – lovely accommodations and friendly staff and a wonderful breakfast that’s included in the very reasonable price). We left Rapid City the next morning and plowed on to Sioux Falls, South Dakota by way of Wall, SD (it’s become really commercial since my last visit there 35+ years ago – basically the whole town has become a part of Wall Drugs, *sigh*) and Badlands National Park and the Corn Palace in Mitchell, South Dakota (surprise! It’s actually made of corn!). We made it to Sioux Falls around 7pm and went to a great dog park in Spencer Park – lots of space, green grass and many dogs for Maggie to play with. Then it was off to the Best Western Plus for the night. The next two days we hammered across Minnesota into Wisconsin and Illinois, stopping for a not very memorable night in Mauston, WI (don’t worry, we had never heard of it either) then hit the road for the final push to Chicago. As I mentioned, we had to be in Chicago before noon on July 3 to check Maggie into Tucker Pups, a very posh doggie day care and boarding place in downtown Chicago (while the hotel we are staying at is theoretically dog friendly, the fees are crazy – $25/day with a non-refundable $100 cleaning fee – boarding was cheaper). While Maggie has been a little trooper, our last few days driving to Chicago we averaged 5 hours in the car, which wore on her patience. I’m looking forward to a slower pace home – easier on her and easier on us.

In Chicago we stayed at the W Chicago Lakeshore, which looks out on Navy Pier where, according to Travel & Leisure and assorted folks we’ve talked to, they do the best fireworks show in Illinois. The hotel is very blingy, with a hip Las Vegas/disco feel. Everything is pricey and after traveling across the country where things were so reasonably priced, this place felt like highway robbery ($66/night to park!?) but so it goes. The customer service was all over the map, too. One person would be really helpful and the next person would be useless or rude. But it was great to see family and who doesn’t love a good fireworks show?

Pics of the adventure so far are here.

The road goes ever on