Post the Inside Passage cruise, we stopped in Sitka for a day and a half before heading to Talkeetna. Sitka turned out to be (in my opinion) the jewel of the Inside Passage. Itâ€™s a lovely little town (population of around 9,000 which makes it the fourth largest city in Alaska) â€“ very walkable with a rich history where the native Alaska, Russian and American influences can all be felt. We visited the Alaska Raptor Center and Fortress of the Bear â€“ both places helping to rehabilitate and care for critters that were orphaned or injured, mostly through interactions with humans (shooting and cars seem to be the mostly accidental weapons of choice). Alaska has, according to them, a really stupid policy of not allowing rescued bear cubs to be released into the wild â€“ if a mama bear is killed, the cubs are shot (unless a resource organization can get to them first). The reasons for the law (again, according to them) are based on science thatâ€™s been proven to be false, but making government change its mind is hard. We talked to some folks after we visited who had different opinions about the whole bear rescue issue. To us they seemed like a bunch of Gentle Bens, but as with many things in life, it’s probably more complicated than it first appeared. Still, Â the Fortress of the Bear will keep fighting for the bears, so good luck to them!

We stayed at the Westmark Sitka which was a nice place located in downtown Sitka. Their wifi was kind of slow, but after a week of basically no or limited connectivity it felt like quite a luxury. After a week of â€œshoiletsâ€ the bathroom was like a spa. We caught a late flight to Anchorage (which ended up being even later than normal due to lack of runway visibility in Juneau, the midway stop on the flight) and the bathroom on board took me right back to the boat â€“ add a shower head and youâ€™d have a shoilet. We spent what was left of the night once we arrived (around 12:30am) at the Anchorage Grand Hotel whose main claim to fame is that itâ€™s about a 5-minute walk to the train station. That worked out well because we were catching an 8:15am train to Talkeetna.

In Talkeetna we stayed at the super charming Talkeetna Cabins right in the heart of Talkeetna (the town that served as the model for Northern Exposureâ€™s Cicely, AK). We could walk pretty much everywhere so spent the afternoon exploring and contemplating our activity options. The only downside to our cabin was that the bedroom loft was located upstairs and the bathroom was downstairs. Peg, the owner and manager, was super helpful and full of good ideas for things to do and places to eat. 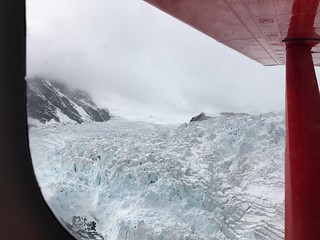 The only activity we had booked was a flightseeing tour around Denali scheduled for the next day with K2 Aviation (can’t recommend them highly enough, a great company!). The weather was pretty rainy and cool so we ended the evening on the early side after watching Mystery, Alaska on my laptop (great movie!). The next day we got up early for breakfast at the Roadhouse, a real Talkeetna institution. It was crazy jam-packed, doing a booming business in cinnamon rolls and sticky buns. After getting a sugar infusion we went to visit the Sun Dog Kennel and meet the sled dogs they raise there and get a tour (which involves cuddling puppies so need I say more?). Their operation isnâ€™t quite as grand asÂ Seaveyâ€™s Ididaride in Seward but was nevertheless fun. Then we went on a jet boat tour up the Susitna River that included a trail hike to a recreated trapperâ€™s cabin. The weather was still iffy so we did this in anticipation of the flight being canceled. Lo and behold, the weather cleared and we were able to take a flightseeing trip to Denali National Park. We had planned on a longer flight and a glacier landing but were scaled back to just a flight with no landing (it was still pretty cloudy and there was not enough fresh snow for a landing). We got to see part of Denali but the summit was obscured by clouds. That happens so often that they call folks who actually get to see it the â€œ30% Clubâ€ – I guess that made us part of the 70% Club. We wrapped up the day with dinner at the Wildflower CafÃ©, another one of the great restaurants in Talkeetna. Our last day we spent relaxing at the Talkeetna Alaskan Lodge enjoying the view from their lovely lobby as the rain came and went. We all agreed that if we came back to Talkeetna we’d stay at the lodge even though it is a little out of town – it really is a lovely place with fantastic views, and well maintained trails to hike/walk.

We took the train back to Anchorage that afternoon, upgrading to Gold class to take advantage of the better views from the train and were back in plenty of time to catch an 11:30pm flight back to LAX.

All in all, we had a lovely trip and look forward to visiting Alaska again – this time we’re going to stay in Talkeetna for as long as it takes to become members of the 30% Club! And two thumbs up for Alaska Airlines – we had all great flights with them and between the flights and our new Â Alaska Airlines credit card, we have over 100,000 frequent flyer miles AND a free companion pass to use. Which leads to the big question: where shall we go next?

With every stop, a new memory

Keeping Big Brother in the Know