Day One: Where We Arrive in Alaska:Â Our Alaska Dream Cruise started a few days ago at LAX. We flew Alaska Airlines from LAX to Seattle, WA then from Seattle on to Ketchikan, AK. We hadnâ€™t flown Alaska in a while, but from what we experienced yesterday, theyâ€™ve really stepped up their game. We could check one bag for free, in-flight service was nice, on board wifi (for TV and movie watching) was free and the planes themselves were 737â€™s. Really, it was a lot like flying Southwest only with assigned seats. The connection in Seattle was a little tight but airport transportation (can you say nifty train) gets people moved around pretty expeditiously so although I, of course, panicked, we easily made the flight to Ketchikan. As did our bags.

We were met in Ketchikan by a rep with Alaskan Dream Cruises (a company we chose after much research – we wanted a smaller boat experience). Is there anything more comforting (other than maybe hot cocoa with marshmallows) than being met in a strange airport by someone with your name on a sign? Victoria guided us to our bus, other folks took care of our luggage and off we went to Cape Fox Lodge. We mused on the bus how nice it was to start a vacation where you had to do no thinking â€“ everything was taken care of. Ah, how relaxing! Victoria explained that the would take our bags to the boat tomorrow and get them all squared away on the boat. All we had to do was kick back and just get ourselves to a restaurant near the boat dock by 1pm.

If I were providing a soundtrack to this post this is where youâ€™d hear the record scratch symbolizing us grinding to a halt. Because once we got to Cape Fox Lodge to check in (and as an side, Cape Fox Lodge is pretty glorious â€“ it sits on top of a hill overlooking Ketchikan and the harbor) the hotel check-in people had no record of a reservation for us or my sister and brother-in-law. Say what? I had booked the rooms months ago. So we had lunch in the restaurant at the lodge while the hotel investigated. While we were eating, the manager came over and started the conversation with, â€œDonâ€™t shoot me, Iâ€™m just the messenger, butâ€¦â€ and then told us that they had nothing, nada, zilch in either of our names for that night. And they were sold out. Uh oh. We called Alaskan Dream Cruises and they told us to check Expedia. Okay, I was told back in November of 2016 when we initially started booking this trip that Ketchikan was small and you needed to book rooms early. And Alaska Dream Cruises very nicely offered to handle that â€“ we told them how many rooms, the names of the guests and voila! They booked us rooms in Ketchikan at the start of the trip and in Sitka at the end of the trip. Only they didnâ€™t â€“ in either Ketchikan OR Sitka as it turned out. And then they basically told us we were on our own. I was so pissed I made Chuck talk to them, not that it did any good. And I was feeling like a real idiot, figuring I must have really f&*^ed up somewhere along they way and NOT made the reservations I thought I had.

We hopped on the Internet (thank God for iPhones! The guest wifi at the lodge sucked) and discovered that a) Ketchikan is pretty small and doesnâ€™t have a boatload of hotels and b) most of them were booked. Double uh oh. The only place that was in the town proper of Ketchikan with rooms available was the Super 8. In fairness to the Super 8, their prices were really quite good and their customer service was superb – the front desk folks couldn’t have been more helpful. The good news is we saved a fair amount over what we would have spent at the Cape Fox Lodge. We called the Alaskan Dream Cruise people back and told them that we had made reservations at the Super 8 and thatâ€™s where our bags would be. Ah, they said, our drivers donâ€™t go out there. Youâ€™ll need to get your bags to the pickup point on your own. Triple uh-oh. So today we need to schlep our bags to the drop-off place by 10:30am and hopefully find somebody to take them to the boat. Otherwise I guess we just sadly drag them around town until 1pm.

My sister found the email conversation that I had with Alaska Dream Cruises in Nov 2016 in which we discussed the rooming needs in Ketchikan and Sitka and they did indeed say that they would make them for us. So I feel sort of vindicated but Iâ€˜m still kicking myself for not calling and confirming. I never had a confirmation number and I should have IDâ€™d that as a red flag. Live and learn. We DO have confirmation number for a hotel in Sitka now, and we didnâ€™t have to sleep on the mean streets of Ketchikan last night so life goes on. Although at this point Alaska Dream Cruises has a long way to go to make us feel like this is really going to be a dream cruise. Time to shake off that bad first impression â€“ what happened was all about the front office screwing up, and had nothing to do with the boat. Iâ€™d like to think this was a learning experience in customer service for them, but I guess time will tell.

Meanwhile, Ketchikan was a cute little town with a lot big ships moving through. All of the big cruise ships stop here on their way to the Inside Passage. So they get massive influxes of tourists during the day and by 6pm the streets are pretty much empty. There are lots of gift stores (Ulu knives are very big here) and places that sell smoked salmon. Really, â€œsellâ€ isnâ€™t quite the right word. â€œHawkâ€ might be more appropriate. They believe in hard sell here. But get past the touristy area near the docks and there are lovely trails along the river and lots of history to learn about. We walked along the Ketchikan River and saw the salmon running â€“ a really amazing site! The as you get higher and closer to where they lay their eggs you see lots of dead salmon. Life is tough if youâ€™re a salmon. The only thing we ended up buying in Ketchikan was some smoked salmon that, we were told was recently caught and smoked right there in Ketchikan. We bought it from an Armenian dentist from Calabasas. What are the odds? 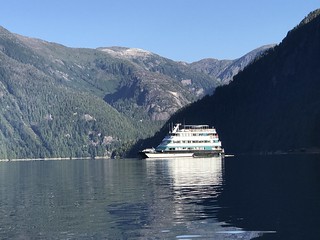 Day Two Where Things Settle Down:Â Our first afternoon/evening on the boat was lovely. Weâ€™re on a ship called the Alaskan Dream. It has space for 40 passengers and I am still counting crew but I think there are around 16. Our stateroom is on the third level and has a lovely big window view out the side. The room has a queen size bed (which could convert to two twins) a small closet and a â€œshoiletâ€ â€“ basically a wet bath. The only thing you have to watch is when you stand up from using the toilet you have to be careful not to grab the shower control.

The boat in layout is quite similar (only larger by a factor of two) to our Galapagos boat. On the main level there is a spacious lounge with comfy seating and a bar, a dining room and a couple of staterooms. The second level has more staterooms and two decks (one on each end). The third level has staterooms and a deck off the front. The top level has table under a cover (it rains a lot in the Inside Passage) and a great 360-degree view of the world. The lower level is where we get on and off the boat and where they launch water activities.

The pace of life on the boat is pretty low-key. Activities arenâ€™t as jam-packed: today there was kayaking in the morning (but as there were only 5 two-person kayaks we took turns so there was a fair amount of hanging-around time) then free time. Lunch was followed by some down time to the next destination. Part of this is necessitated by the sheer size of Alaska â€“ getting from Point A to Point B requires sometimes substantial travel time. As we cruise along I can see the advantage of the larger ships in that they offer lots of on board activities â€“ shopping, fitness centers, spas â€“ to keep you occupied as you move from one location to another. There is a young family on board â€“ the youngest is around 8 or 9 and this slow pace is tough on her. Sheâ€™s handling it well but sheâ€™s bored and by the second day has exhausted the boatâ€™s small supply of games and the like. And (duh-duh-DUH!) there is no wifi and no cell service where we are so no Netflix or YouTube. I guess that’s not so bad. A little freedom from Internet access is good for the soul.

Photos are here. More to come as Internet speeds allow.

With every stop, a new memory

End of the journey