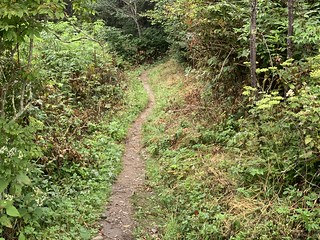 After getting caught up on sleep after our marathon journey to North Carolina, we spent our first full day in NC at the Biltmore Estate â€“ George Vanderbiltâ€™s beautiful ginormous mansion (“America’s largest home”). We took a house tour and signed up for a Legacy of the Land tour of the estate which gave us a lot of background about Vanderbilt’s efforts to restore the forest land on the estate. We explored the gardens and checked out some of the trails and wrapped up the day at the wine bar. They offered a free wine tasting with our entry fee, but the tasting line looked like something out of Disneyland so we headed straight over to the wine bar where they served both wine and food. Good choice on our part! We spent the next day exploring the smaller towns west of Asheville: Waynesville, Sylva, Bryson City which led us to the most visited national park in the country: Great Smoky Mountains National Park. We only had the day to explore and the weather was intermittently rainy and cloudy but we still managed to climb to the top of Clingmanâ€™s Dome where we had a fab view of â€¦ absolutely nothing. It was completely socked in. Still, it was a fun hike and we had rain jackets so the wet didnâ€™t bother us. We visited the Mingus Mill and the Mountain Farm Museum at the Oconaluftee visitorâ€™s center then headed back to Asheville on the Blue Ridge Parkway which was very pretty but very foggy and wet. Apparently this is a very common weather pattern for the area. The park has loads of trails and lots of backcountry hiking & camping but if you’re expecting the amazing scenery and breathtaking views of Yosemite or Yellowstone, you’re in for a surprise. It is very densely forested and lacks the super tourist-friendly villages and hotels that you find in other parks. For the busiest park in the U.S. I was surprised by how NOT crowded it felt.

A friend of my sisterâ€™s said that Greenville, SC wasnâ€™t far from Asheville (and indeed it wasnâ€™t â€“ an easy 90-minute drive) and was a really charming and affordable small town in the foothills of the Blue Ridge Mountains, popping up on lots of those great small towns in America lists. After spending two days exploring Asheville and the surrounding area we had decided that Asheville was not for us â€“ itâ€™s not much of a small town anymore and generally just wasnâ€™t what we were looking for (and was also more expensive than we expected). The small towns we visited west of Asheville were too small and had no infrastructure to speak of (public transportation, health care, proximity to a good airport, etc) â€“ so we were ready to experience something completely different and Greenville fit the bill. Itâ€™s charming, with lots of neighborhoods surrounding a vibrant downtown. We talked to a realtor and learned about prices and neighborhoods. Once he learned we were hunting for a place to retire he told us we didnâ€™t need to look any further. 🙂 He didnâ€™t convince us but we did come away feeling that our favorite town in North Carolina was actually in South Carolina! Whoâ€™d have guessed? One nice thing about both Greenville and Asheville was that they both seemed more cosmopolitan and accepting of all people which is a quality of life issue that matters to both Chuck and me. Weâ€™re not super political but while you can take the liberal out of CA you canâ€™t take the liberal out of â€¦ okay fine, weâ€™re pretty liberal so it was a little disconcerting to see signs outside businesses asking people to please leave their guns outside â€“ one was outside a Whole Foods Market, for peteâ€™s sake! And in several gift shops there was a full selection of â€œtrumpianaâ€ for sale. Iâ€™m all for live and let live, but Iâ€™d prefer not to have that sort of thing shoved into my face. In Asheville and Greenville you felt that a LOT less, IMHO â€“ everywhere we went had a very relaxed feel and everyone seemed to have a pretty open-minded live and let live attitude about life, the universe and everything which we really appreciated. 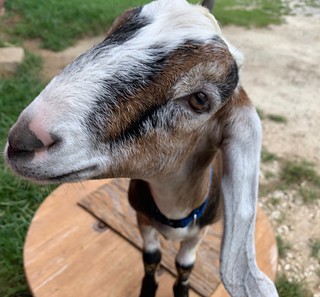 Leaving Asheville we headed east to Charlotte. Along the way we stopped at Carl Sandburgâ€™s farm Connemara Â in Flat Rock, a charming detour where we visited the goat barns and the goats that live there. They were very sweet and friendly and loved investigating pockets and open purses or bags for food. Once we got to Charlotte it didnâ€™t take much exploring Â to see that it wasnâ€™t for us (the freeway traffic alone was a big warning sign) â€“ itâ€™s a larger and more spread out city than weâ€™d like and the cost of housing (according to Zillow) was pretty high for NC. This left us with a day to kill so we decided to go for something completely different and headed north to Mount Airy, Andy Griffithâ€™s hometown and the town that was his inspiration for Mayberry. It was absolutely charming! It sells itself as a retirement Mecca â€“ and indeed it has a few things to recommend it: a lovely downtown that is quite walkable, really affordable housing and a pleasant climate (they get snow in the winter but not THAT much and it gets hot in the summer but not THAT hot and fall and spring are perfect, apparently). If youâ€™re going to live there it really helps to be an Andy Griffith fan â€“ the whole town feels like one big Andy Griffith/Mayberry lovefest. We walked around town and in the visitorâ€™s center met another couple who convinced us to join them and split the cost on a squad car tour of town (it’s $40/car so if you cram two couples in it’s $20/couple). This turned out to be absolute hoot and not to be missed experience if you find yourself in Mount Airy. The squad car was in fact a restored 1962 police car just like the ones that appeared on the TV show in the 60â€™s. Our driver, Mike, was a chatty and knowledgeable tour guide who showed us the granite quarry (which is huge and the largest supplier of granite in the country) and (of course) the Andy Griffith Museum and his childhood home (which, we were surprised to learn is now managed by the Hampton Inn and available for overnight stays!). We ate at Barneyâ€™s (as in, you might have guessed, Barney Fife) and did a bit of touristy shopping and generally had a lovely day. While we werenâ€™t convinced that it was our retirement home, we would highly recommend a visit should you ever find yourself in the area. 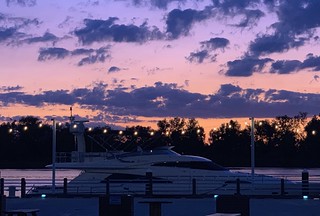 Wrapping the trip up, we spent in Wilmington on the coast. Chuck has a longtime friend who lives there and its location is quite nice â€“ on the Cape Fear River along the Intracoastal Waterway and just a few miles east is the Atlantic Ocean. My sister and brother-in-law flew in from Pittsburgh and joined us a for a few days as well. Wilmington was by far our favorite city in NC. It has a wonderful historic downtown, lots of affordable housing (and new waterfront condos going up as we speak), a nice, medium-sized airport right in town and good healthcare in town with pretty easy access to Atlanta, six hours to the west. It helped that we stayed at a lovely Embassy Suites that was right on the riverfront. Our room had a great view and you could walk out of the hotel and be right on the riverwalk with easy access to downtown Wilmington. We toured one of the old houses in town (the Burgwin-Wright house), walked along the Riverwalk, explored the very old VA cemetery. We drove out to Wrightsville Beach (where I saw more fish caught in one morning than in my whole life to date) and visited Fort Fisher, the site of a last stand battle to keep the port of Wilmington in Confederate hands (spoiler alert: the Union won). WeÂ learned that we had just seen a big cannon captured at Fort Fisher when we toured West Point. Itâ€™s a small, small world of cannons, I guess.

Hurricane Dorian was moving slowly across the Caribbean and on our last day in Wilmington changed up its path and appeared to be heading toward the Carolinas so we were glad to be heading north to Raleigh and the airport and our flight home. I guess thatâ€™s the downside of moving to the Carolina coast â€“ you run the risk of the odd hurricane threat. We made it to Raleigh without a problem and took a last side trip to Durham (aka the home of Duke University). Durham did nothing for us, and the cost of housing there seemed pretty high for not much house.

And that ends the first chapter of our retirement home quest. Iâ€™m really glad we came â€“ you can do all the research you want on the Internet and read all the magazine articles in the world but nothing is as good as actually seeing a place. I feel like now we can make some real comparisons as we explore other places. Personally, I found Greenville, SC and Wilmington, NC to be my faves. They were both great combinations of all the things weâ€™re looking for â€“ a smallish town that still has enough going on that there are good restaurants and entertainment, with lots of access to outdoor activities, affordable housing, an airport and decent healthcare.

The search continues, but we are officially on our way to â€¦ somewhere. Pics here.

One foot in front of the other

Reflections on a truly volcanic trip