The day before we left for Africa I came down with laryngitis and a cold (of course). CHuck had been sick the preceding few days and was on the road to recovery when my symptoms started presenting. Happily it was not in my ears, just my throat and chest so flying wasn’t painful. But I think I packed an extra pound’s worth of cold and sinus meds (Mucinex DM is my new BFF). What are the odds?! Â We’ve been perfectly healthy all Fall and Winter. Thanks, universe! As I write this I am getting better but am still Phlegm Girl in the morning.

ANYWAY, we planned this trip with the intent to give us time to acclimate to the time change in stages and to keep flight times to 11 hours or less. So we flew first to Paris where we planned to spend two days catching up on sleep and seeing the sites. This was a great plan, and mostly worked out except we didn’t plan on the transit strike. The Metro and most bus lines we either not running or running on greatly reduced and unpredictable schedules so we had to make alternative arrangements for transportation to
and from the airport and walked everywhere versus hopping on and off the metro. It turned out to be no big deal (albeit a bit more expensive) and walking allowed us to explore interesting side streets and neighborhoods that we would have missed if we’d been riding the Metro everywhere. 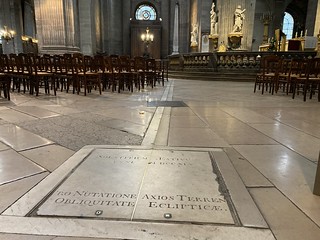 We stayed at the Hotel des Grandes Ecoles on the left bank near the Sorbonne. It was a very neat old boutique hotel with a charming garden courtyard. Our room was postage-stamp sized but opened on to the courtyard so had a lovely view. Given how brain dead we were the first night after being awake for 24+ hours, the size of the room was no big deal as long as it had a bed. My big goal was to see Notre Dame and we accomplished that – and it was as heartbreaking as I was afraid it would be. They have the whole area cordoned off and have set up an exhibition on the walls that now enclose the cathedral
and grounds that talks about the fire and the plans to move toward rebuilding. It looks like they are still assessing the condition of the remains and at this point imagining that it will be rebuilt in 5 years (an estimate I’ve heard) seems nigh on miraculous. After a night’s sleep we went on a city walk with Paris Greeters, a free service where a local gives you a guided tour of the city (well, of the parts of the city you’re interested in seeing). We stuck around our neighborhood and the Ile de la Cite for the most part and had a wonderful time hearing about that part of Paris from someone who has lived there for over 40 years. We met our friend Meagan for dinner (she walked from her apartment and said that she’s been
averaging 50,000 steps a day during the transit strike!).

We flew out the next day but not until late in the day so had a chance to do a bit more exploring and visited Saint-Sulpice (which was featured in The Da Vinci Code) and at long last found the Abbey of Saint-Germain-des-Pres (the oldest church in Paris and toured the Musee Curie (located in the Curie Institute near the Sorbonne). It’s not huge but it’s really informative (I learned a lot about the discovery of radium) and my admiration for Marie Curie increased – oh, and it’s free!)

Our flight to Nairobi left at 7:45pm and arrived at 6am, so once again we found ourselves sleep-deprived and completely confused about the actual time. Whatever, we made it!

Nous sommes arrivee! And our luggage is here, too!

It’s all about the journey, right?